Solar Cooler – The subject of solar cooling is for several purposes, but overall, we can summarize it as the production of low temperatures using the sun as an energy source. It could be said that practically all refrigeration systems are solar systems. Because a home refrigerator that produces cold is connecting to the power outlet. The electricity comes from thermoelectric plants, hydroelectric plants. And Also fuels made in thermoelectric plants in which solar energy accumulates over millions of years.

These systems are classify as passive because there is nothing in motion. Instead, they are all stationary elements. But act according to certain principles of thermodynamics and result from obtaining. A  pleasant building temperature. In contrast to passive methods, active systems work with solar energy.

What Are Energetic Solar Cooling Systems

Energetic Solar Cooling Systems are Increasing; photovoltaic cooling systems will be using  with a technology. That transforms solar radiation into electricity. In a photovoltaic panel that produces electricity. What is done is to couple an energy source in which electricity is creates that is supply to the refrigeration system. To a standard and current mechanical compression refrigerator. With this, an almost solar refrigeration system is obtain. in a non-strict sense. But it is considering  an essential solar cooling system.

Some other systems are use on small scales. Such as ice chests that use the same principle of generation with photovoltaic energy. And produce refrigeration through other methods such as the Thomson effect. 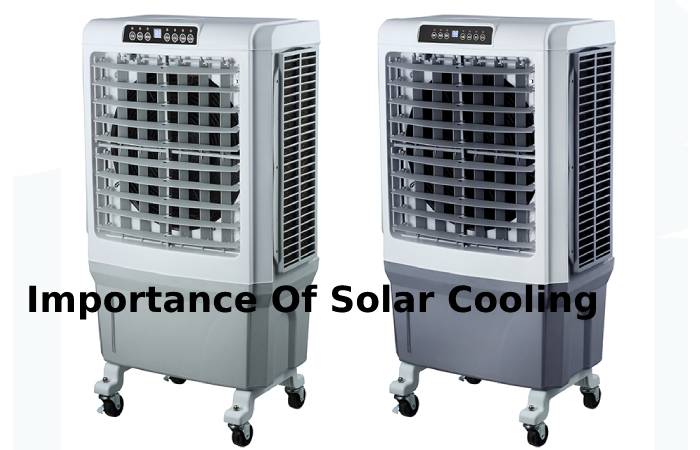 The most important of Small systems because what limits this type of technology is the size of the solar collection surface. That is, capturing solar energy to produce thermal energy by heating water. Which has to be done on surfaces exposing  to the sun, which are often the roofs of the buildings themselves, then large systems by absorption.

Taking into account deal costs, operating costs and executing an economic feasibility study of fewer than three years. We can practically say that the fossil fuel boiler system will win most of the time.

But let’s take the study to a longer term of five to seven years. The one that begins to be more competitive is the solar cooling system. Because its depreciation rate is a little slower than the fossil fuel processes. Still, finally, it surpasses the other procedure due to the increasing fuel cost. While solar cooling systems do not require operating costs for fuel, natural gas or diesel methods require paying a bill for energy, and their prices fluctuate according to market or marketing  behavior.

In the short term, if fossil fuel systems become more competitive, but in the medium term and not to mention in a long time, solar systems are the most important ones. For example, a refrigeration system can be technically design to work 24 hours a day, but that would imply having extensive storage systems so that they work with solar radiation during the day. Then, during the night, they work with all the energy accumulates, which involves areas of even more significant collections, which generates little competitiveness for this type of technology.

Cases of Use of Solar Cooling

As for the most successful solar cooling systems, it could be said that in the United States and mainly in Europe, even though they do not have considerable solar resources, in reality, what has been uses are hybrid systems; some systems work with solar energy, but in fact, they are not the most using or the most competitive, what they are using are simply solar cooling methods where they take advantage of solar energy during the day and use fossil fuels at night.

This is where it is being apply work is currently being done to demonstrate whether solar. Or hybrid systems can be more economically competitive than traditional technology with mechanical compression.

These procedures need to be develops a little more they are technologies that still require many years to be profitable. That is, the investment recovery rates are still somewhat high, basically due to the capture mechanisms that are still, in some cases, of high economic value, but they are constantly being perfect

Solar cooling is an important, exciting alternative, especially in places with very intense solar radiation, and therefore, the thermal load requirements are essential. Still, there is a very happy coincidence that when air conditioning is most require air due to thermal gains is when solar cooling systems work best and reach their most fantastic capacities, but of course, if it is a building that requires work at night, an auxiliary procedure or what is call a hybrid system will be needed.

Half Keyboard – Introduction, Keyboard Shortcuts, Fractions On A Keyboard, More

Half Keyboard – Introduction, Keyboard Shortcuts, Fractions On A Keyboard, More